0
The Clone Wars these are not.

It seems my prediction from last week’s recap was accurate. As we enter the back half of The Mandalorian – Season Two, it seems things are kicking into high gear. While still something of a filler episode -and one that is exceptionally heavy on fan service-, The Jedi not only addresses lingering questions of the main plot, but gives us some highly stylized and solid action sequences to feast our eyes on.

After helping his old friends deal with an imperial problem on the planet of Nevarro, Mando is finally able to reach Corvus and is one step closer to locating Ashoka Tano (Rosario Dawson). The episode actually begins with a stylish sequence where Tano destroys some droids, setting up this week’s plight. The City of Calodan is being held captive by the deadly Magistrate Morgan Elsbeth (Diana Lee Inosanto) and Tano is attempting to liberate the villagers. Since this is all featured in The Mandalorian, she obviously needs Mando’s help.

That’s jumping the gun a bit, however. Before this alliance of Mandalorian and Jedi can happen, Mando touches down on the planet and is greeted by Elsbeth’s second-in-command, Lieutenant Lang (Michael Biehn). Granting passage into Calodan, Elsbeth’s guards soon guide Mando to Elsbeth and she offers him a proposition: defeat the Jedi thorn in her side and she’ll gift Mando a spear made from Beskar. Since we know Beskar is of the utmost importance to Mandalorians, it’s clear that Mando isn’t going to refuse. 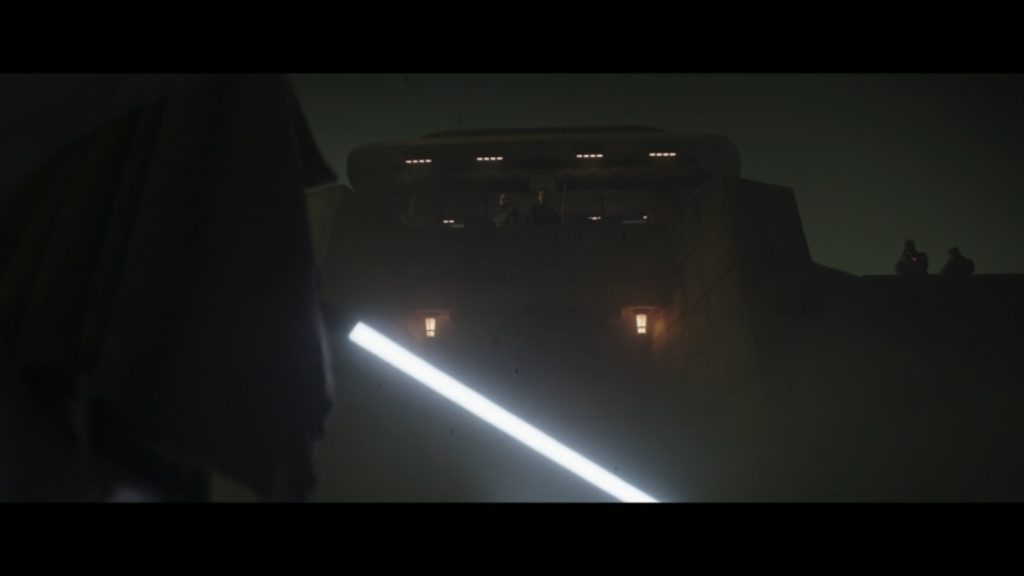 So with a plan set, Mando sets off into the wilderness to locate this Jedi. While unbeknownst to him at the moment, it turns out to be Tano and he nearly comes to a deadly end when she surprise attacks him. The two trade some blows before Mando brings up the name of Bo-Katan, the Mandalorian that helped him a few episodes ago. She had instructed Mando to bring The Child to Tano, which leads to probably the most important development of this season.

After an elongated shot where Tano and The Child are staring at each other, Mando becomes inquisitive. He wonders if Tano can hear him, which she confirms she can. Through telepathic communication, she tells Mando that The Child’s name is actually Grogu, and he was raised at the Jedi Temple on Corusant. To her knowledge, Grogu is the second of his species she has ever encountered, with the first being Jedi Master Yoda.

A lot of this is just fan service type stuff that I’ve been complaining about in The Mandalorian for weeks now, but it does begin to fill in the details about The Child’s life. Even if you know absolutely nothing about Star Wars, these details sound heavy and important. It shows why last week, Moff Gideon was so intent on capturing Grogu to steal his blood. He’s fostering a strong power that he’s needed to suppress to stay alive. That is shown, too, when Tano tries to have Grogu take a stone from her hand. 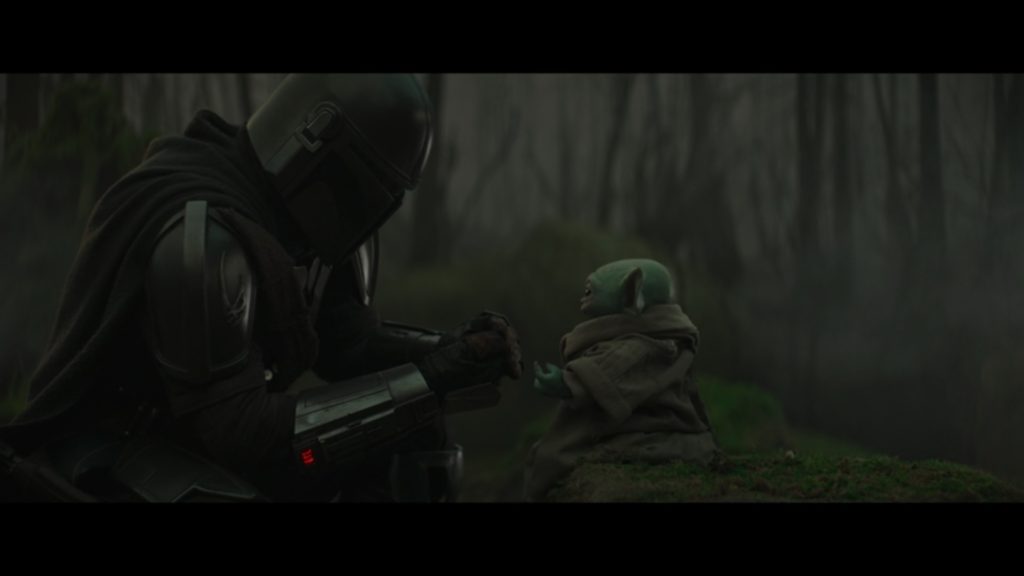 In probably the best bit of character development yet, Mando tries his hand at channeling Grogu’s force powers and has him levitate the metal ball top from his ship’s cockpit. Foreshadowed earlier in the episode, the connection between Mando and Grogu has grown beyond a simple bodyguard routine into something of a father and son relationship. Tano senses fear in Grogu, likely because he’s worried that Mando is going to meet a deadly fate trying to protect him.

While reluctant to hand Grogu over, Mando urges Tano to train him. She is initially hesitant, but then proposes the alliance I mentioned earlier. Mando doesn’t want to keep secrets, so he explains how Elsbeth instructed him to kill Tano. With that in mind, the two hatch a plan that will allow them to enter Calodan without suspicion.

This brings us to the finale, which is more like an extended action sequence. Tano walks into Calodan under the guise of having killed Mando and starts tackling with the various hunter droids in the city. Elsbeth then orders her guards to kill the captive prisoners, but Mando swoops in to set them free. He locks eyes with one of the villagers he briefly spoke with earlier and they set about making sure everyone is safe. 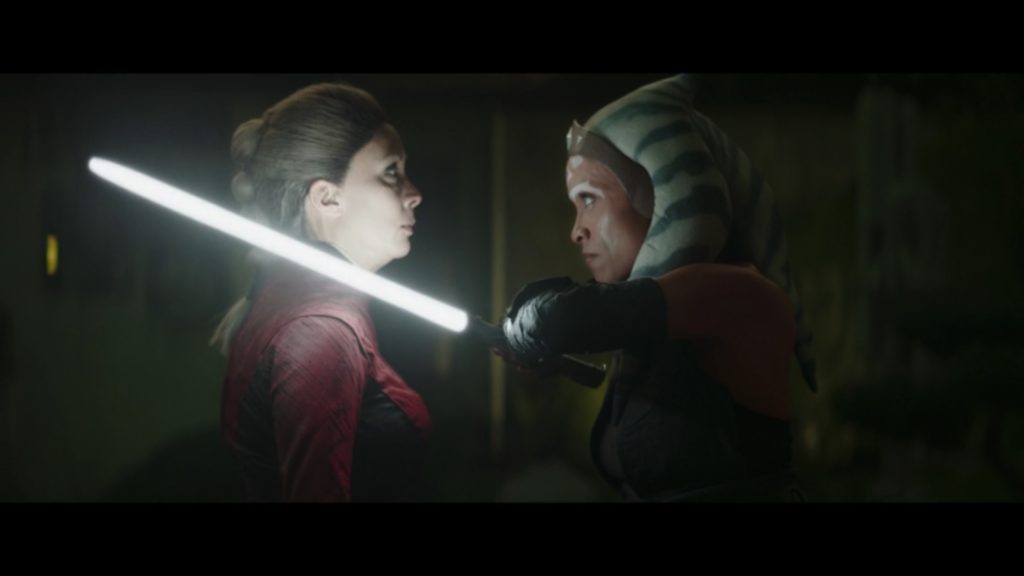 Whether consciously or not, Tano is something of a ninja and she takes to the rooftops to stalk her prey. It was likely an intentional move by director Dave Filoni, as Calodan is sporting something of a Chinese aesthetic. It feels very much like a wuxia film, with tons of flying, clashing weapons, and sudden escapes. The closing battle, as well, is absolutely thrilling. Tano squares off with Elsbeth and it’s like something out of The Raid 2, likely because of Inosanto’s training under her legendary father, Dan Inosanto.

Mando doesn’t get as epic of a stand-off, but he does fit the bill perfectly for a western. Lang stares him down and attempts to fake him out by surrendering his firearm, but then goes for his knee holster to shoot Mando down. Doing his best Dirty Harry impression, Mando swiftly shoots him and the day is saved. You don’t less with a Mandalorian.

In the final moments, we’re treated to an incredibly touching scene where Mando starts to show some emotion. Pedro Pascal delivers an amazing performance, slightly cracking his voice when Tano asks for Grogu and Mando reluctantly agrees. When he returns to his ship, he finds Grogu fast asleep and wakes him up. He then cradles him gently before mustering the courage to move forward with his task. Thankfully for the viewers, Tano refuses to train him and tells Mando of another Jedi Temple that he can travel to. She puts Grogu’s fate in his own hands, as the decision to become a Jedi should be his own. 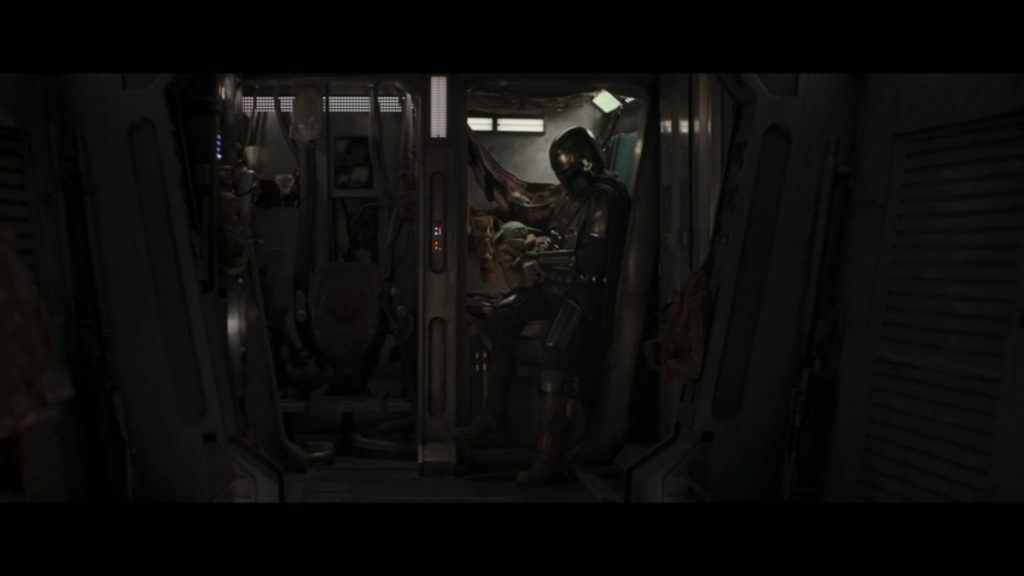 So while that invariably makes his episode something of a filler arc, it’s the best one of the season yet. It not only has lore, a major revelation, and a fan-favorite animated character entering the live action Star Wars universe, but it’s briskly paced and thrillingly shot. I’m always a sucker for any piece of media with eastern sensibilities, but The Jedi goes all in on that and creates a feast for the eyes.

I’m not necessarily convinced that the final three episodes are going to make up for the weeks of filler and meandering plots we’ve gotten from The Mandalorian this year, but if the next few episodes can be as good as this, I’ll be content. Just keep injecting more martial arts sensibilities into the proceedings and everything should end up fine.