One would think that it would be the big action blockbuster film that makes you miss the movies most. And, to an extent, being forced to watch them on the small screen does make you miss theaters. The big explosions and action literally don’t resonate as well at home without massive speakers shaking the seats. But with Barb and Star Go to Vista Del Mar what’s all too clear is that it’s the comedies that suffer the most from a lack of theaters.

Laughter is something best shared. It’s easier to lose control laughing when there’s an audience of others doing the same thing around you. Seeing a comedy in theaters turns a few good laughs into a classic comedic film. Barb and Star Go to Vista Del Mar would benefit so much from an audience. Its jokes and comedy are the kind that builds through an audience, grow as crowds of people share them after seeing the movie, and then enter the general lexicon because of a shared experience of fun. Sitting alone watching it doesn’t diminish the humor but it does make it a bit less, offering less of a chance for a comedy to grow into a Comedy.

All that is to say, Barb and Star Go to Vista Del Mar is a good comedy that I would have liked to watch with more people around me.

It is incredibly unclear from the trailers exactly what Barb and Star, which is what we’ll refer to it as from here on out, is about. Clearly, the film does involve both Barb (Annie Mumolo) and Star (Kristin Wiig) going to Vista del Mar, a touristy beach town on the gulf coast of Florida. Aside from that, there appears to be no story and I’m almost remiss to reveal what it actually is because the absurdity of it is part of the film’s fantastic charm. However, its hard to discuss the film without it so this is the full warning that going in blind might be your best bet and if you’re planning to do that just know that Barb and Star is hilarious, off-kilter, and charming.

Barb and Star are two small-town women stuck somewhere in the 90s in both their dress and lives. After each lost their husband — Barb’s died and Star’s left her — the pair settled down into a comfortable life together. However, when they lose their job it prompts some self-reflection and they decide to take a trip to Vist del Mar. The problem is that at the same time Sharon Gordon Fisherman (also Wiig), an evil, albino supervillain has concocted a plan to kill everyone in Vista del Mar through deadly mosquitos. She’s sent her henchman/would-be-lover, Edgar Pagét (Jamie Dornan), to initiate her plan but Barb and Star run into him, and love is in the air. 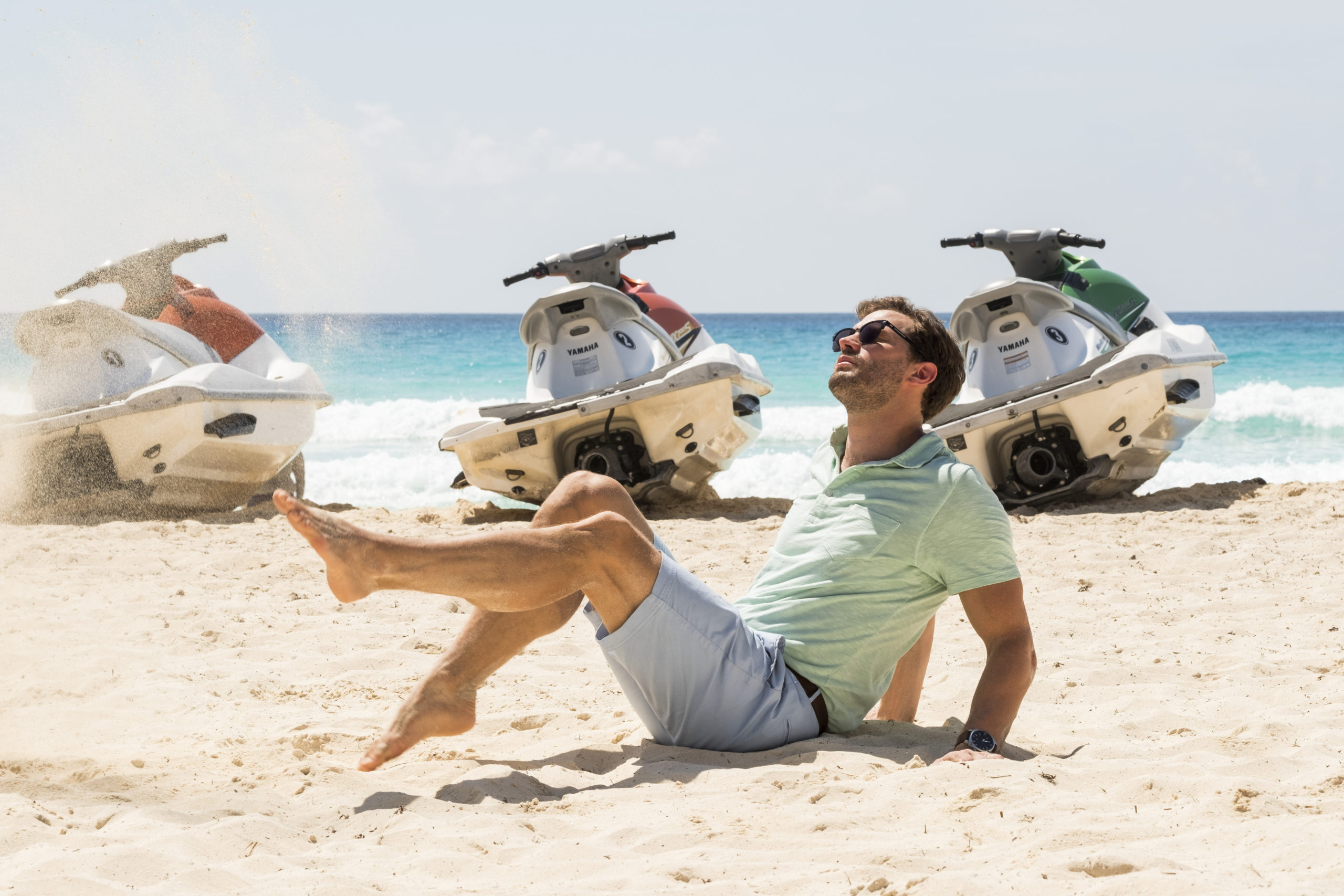 The obvious standouts of the film are Barb and Star. Wiig and Mumolo are absolutely fantastic together, riffing through hilarious conversations that match the banter of any of the best comedic duos out there. It’s not clear if they’re improvising or simply wrote the characters that well but whatever it is they’re fantastic. The film shines whenever the two are on-screen, especially since the comedy comes from a place of love, not mockery. Despite Barb and Star appearing like the stereotype to middle-aged women stuck in the 90s, the humor is never derived from mocking them. Both Wiig and Mumolo deliver actual characters, not single jokes and it means the humor isn’t one joke stretched over an entire film but creative and effective comedy from pitch-perfect delivery. Just the pair of them turning and saying “Hi” can elicit a laugh they’re so on point.

The film’s more surreal aspects feel a bit awkwardly placed for some of the film. Barb and Star are so surprisingly grounded that the whole supervillain plotline often feels like the comedy trying a bit too hard and pushing into Austin Powers parody style of comedy. That’s not a bad type of comedy but in the beginning it feels at odds with the rest of the film. However, as the film unfolds and begins focussing the story less on the evil plan to kill everyone with mosquitos and more on Star and Edgar’s budding romance and Barb’s growth out of her shell it all begins to merge perfectly. By the end, Sharon launching herself out of a canon to stop Barb and Star from stopping her seems perfectly in place… and don’t worry, that’s not even the most ridiculous part of the conclusion of this film. 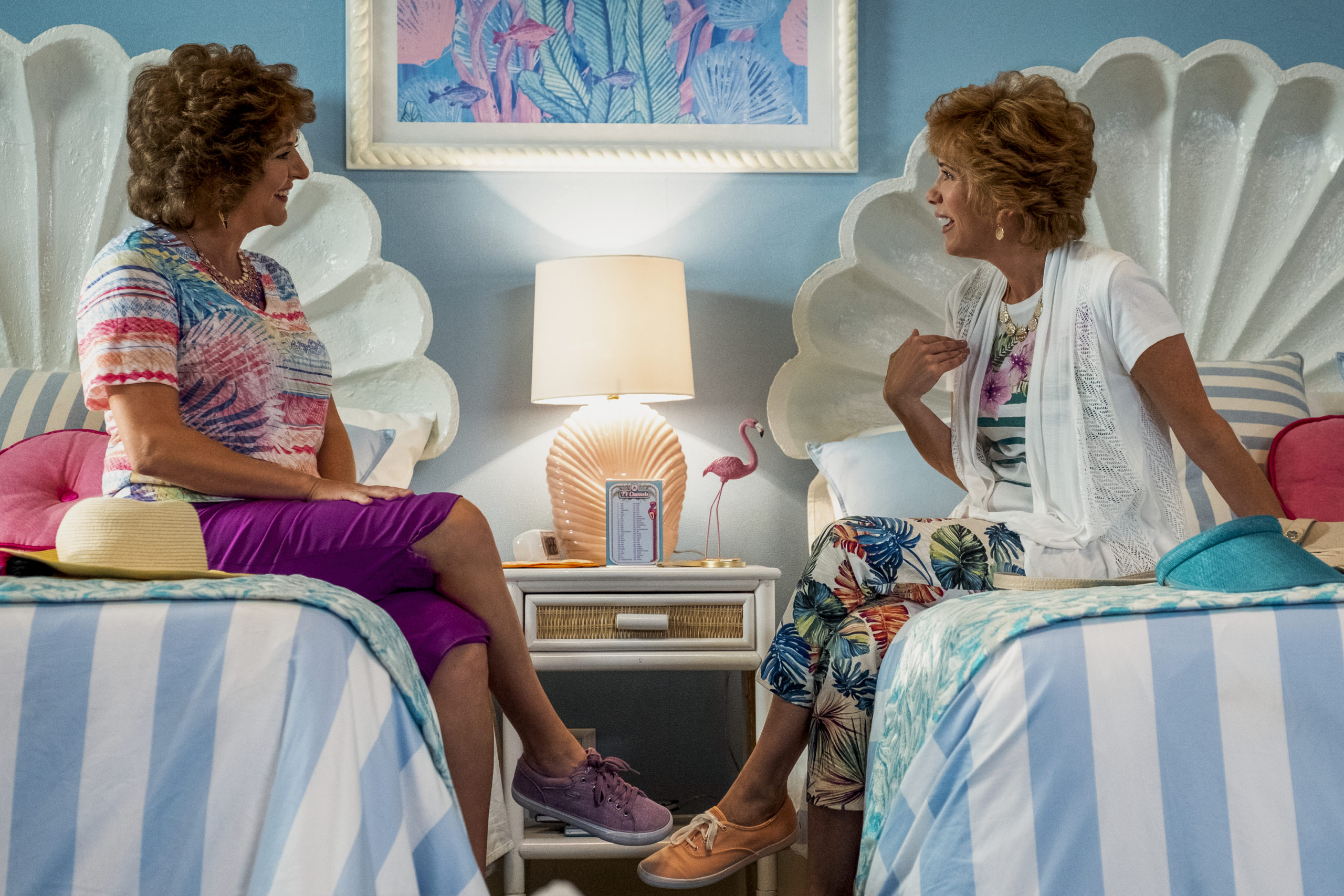 There’s plenty of sight gags shoved in throughout the film and Barb and Star’s conversations should be generating memes for years to come (if it catches on despite its lack of theatrical release) but what really stands out is the film’s heart. Underneath all the ridiculous jokes (an orchestra of trained mice playing dramatic music) and oddball humor (a pianist who routinely sings about boobs) and surprise musical numbers (one directed at seagulls) is a film with heart. Thanks to the aforementioned treatment of its characters as real people the film can layer the comedy over a story that actually makes you feel something. Barb and Star coming out of their shells and growing feels real, despite the fact that the only pants they wear are culottes. Even that simple fact, a form of derision in most other comedies, is here a literal saving grace.

That’s the magic behind Barb and Star Go to Vista Del Mar. It’s magic that hopefully, people will see, and even though they can’t laugh at it in a large group maybe they’ll laugh on their own. There’s enough funny here to do it for sure. However the true power of the film, and what should make it stick despite its sadly digital-only release, is Barb and Star themselves and the heart they bring to the movie. Yes, the pair are funny together but despite them being comic tokens on top there is far more below the waves off the coast of Vista del Mar. 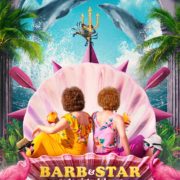 Great. Definitely check this one out. It is highly recommended.
8.4

Barb and Star Go to Visit Del Mar is a fantastic comedy that avoids the traps of mockery to instead deliver actual laughs through characters that are easy to root for and surprisingly grounded despite the absurdity of almost every aspect of the film.