0
You can't handle the truth!

In a year when police have become some of the most controversial figures in law enforcement, Sorkin has perfectly timed the release of The Trial of the Chicago 7 to pose questions of moral ambiguity versus civic responsibility. It’s like the seminal Thoreau work, only enacted in a much bloodier assault.

The Trial of the Chicago 7 tells the true story of the seven (initially eight) defendants involved in the anti-Vietnam war protests in the Chicago DNC in 1968. Following their highly-publicized 6+ month trial for separate offenses relating to the riots, the film forms a picture of the formidable protestors, students, and activists.

Pragmatist Tom Hayden (Eddie Redmayne) and idealist Abbie Hoffman (Sacha Baron Cohen) come up against steely opposition in the form of attorney Richard Schultz (Joseph Gordon-Levitt) and a morally bankrupt judge, Justice Julius Hoffman (Frank Langella).  The group of seven faces a battle to protect their integrity and to expose foundational flaws in the nation’s law enforcement systems. Sorkin handles his subjects with reverence but isn’t afraid to use screenwriting prowess to accomplish an energetic, highly-charged drama.

Immediately, there’s a sense of urgency about the film. We catch these characters during their trial (much in the way that The Social Network reveals that its story is being told retrospectively), pieced together from different testimonies during a lawsuit. The director’s thumbprint is all over the feature, with reports from defendants overlapping in different sequences spliced together. Each one gives a little more away than the last.

Throughout the course of the film’s 2-hour-plus runtime, we witness the stories behind individuals who make up the group. Tom Hayden is a passionate anti-Vietnam protestor and leader of his student union. He conscientiously objects to the mass-conscription of 18-24-year-old men to Vietnam under the Nixon administration, realizing that the move would wipe out a generation. He’s initially present in activist circles on campus at his college and first arrested for a minor charge: letting air out of a police car’s tyres. Though minor, the offence is indictable and he’s detained the next day, sparking outrage in the student community. The tension in the group builds, which is exacerbated by the growing political unrest.

At the same time along a different end of the political spectrum, Abbie Hoffman is speaking to a group of zealous followers. The descendent of Russian Orthodox Jews, Abbie is no stranger to oppression, being the co-founder of the Youth International Party (known as ‘Yippies’). The separate groups soon coverage in increasingly charged gatherings that eventually lead to a fateful riot involving the Chicago police.

We posit ourselves within the group, this coming-together of practically opposite but ideologically connected characters. Things heighten when we hear of violence, assault, then murder. During the trial, even the defendants are treated so abhorrently by the ruling members that it becomes impossible not to feel enraged. 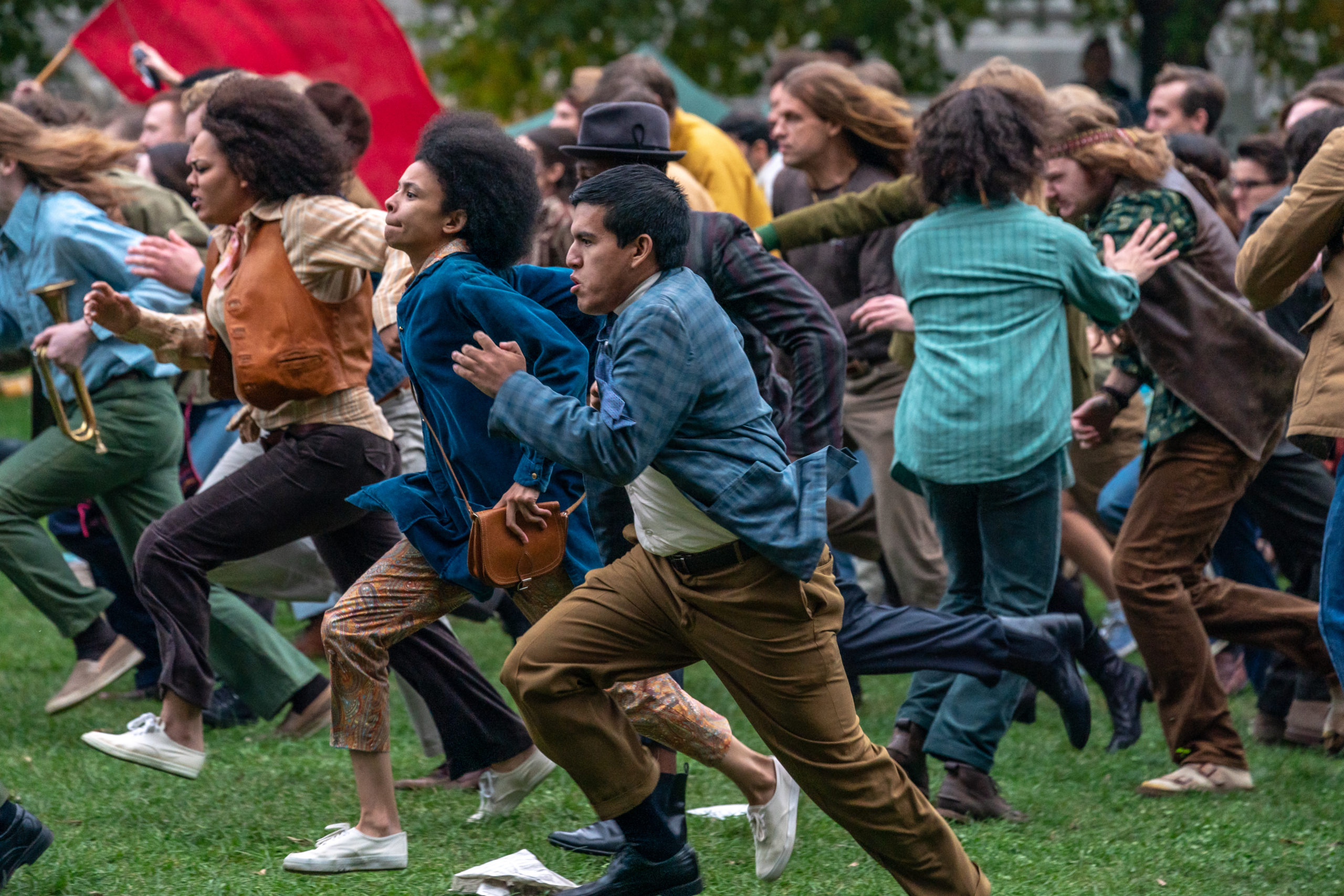 There are links to Steve McQueen’s Mangrove in more ways than one, showing how timely both pieces are. The courtroom drama, the presence of the Black Panther group during the unrest of the 60s riots, the focus on black and ideologically marginalized people: these are all pointy seismic shifts in culture 60 years ago, but are echoed by a shift in public consciousness now about law enforcement, the media’s role in telling these stories, and our reactions. There’s a lot to unpack and I think it’s more than ok -it’s healthy, even- to feel moved, agitated, and like you want to act against forms of inequality after you’ve seen these films.

Chicago 7 is much more of an ensemble piece than Sorkin’s previous efforts, Molly’s Game and Steve Jobs included. While he’s been more than adept at stringing together quick repartee in The West Wing (who could forget?) and The Social Network, his latest feature is truly an ensemble on which he takes command.

While not always having large speaking parts, each plays a significant role here. Redmayne is the one actor I was perhaps most wary of: he just can’t keep away from the riled student trope, though the days of his collaborations with Tom Hooper feel a world away from 1960s Chicago. For what is an unusual pairing (though Baron Cohen and Redmayne briefly worked together in Les Mis), it does work. We get the opportunity to hear what these conflicting personalities think about each other and how they’re forced to work together to find a solution to their common problem.

One thing about Aaron Sorkin: he’ll always find a way to make you think about right and wrong. It’s the simple, foundational principle on which he’s built his most successful work: initially polarising characters, gradually blurring the lines between them. Before long, we wonder whose side we’re meant to be on, much less how we feel about those characters.

That’s not to say the film was perfect. At times, the film is altogether a bit too heavy-handed. A restaurant of wealthy patrons enjoys a party while the riots take place outside, and we didn’t need a character asking aloud, “Am I the only one who’s seeing this?” Neither did we need someone retrospectively explaining that the restaurant encapsulated the 50s while the riots outside signalled the 60s, the future, and progress. There’s an element of telling, not showing. I didn’t especially like the way the film wraps up either, as it felt a little fabricated and overtly patriotic.

I wouldn’t describe The Trial of the Chicago 7 as nuanced, but I’ll give it credit for its message. A final title card sequence reveals what each main character went on to do, reinforcing the message that this isn’t just fiction, but recent history that we’d be wise to pay attention to in the present moment. Maybe it doesn’t break new ground cinematically, but kinetic editing and sharp repartee transport an otherwise common genre firmly into Sorkin territory, with themes that are all too relevant today. 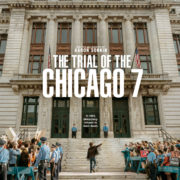 Definitely check this one out. It is highly recommended.
8.2

The Trial of the Chicago 7 uses kinetic editing and sharp repartee transport an otherwise common genre firmly into Sorkin territory, with themes that are all too relevant today.